A YEAR-LONG SERIES OF PERFORMANCE, SLAM POETRY, AND ORAL HISTORIES
February 22, 2020 at Downs Field
& throughout the year, virtually

Take Me Out to Downs Field is a year-long series of tailgates, performances, poetry slams, and story circles that celebrate the legacy and future of this historic place.

This project builds on Forklift’s 2014 production Play Ball Downs Field, a performance created at the invitation of Six Square that featured Huston-Tillotson Rams baseball players, slam poets, and local musicians. This year, the project kicked off with a short reprisal of Play Ball on February 22. The performance featured players from the HT Rams baseball team, slam poetry by Allen Small and Scot Free, and softball stories with Ms. Ada Harden. The day also included autographs and stories with former Negro League Baseball players from the San Antonio region.

Take Me Out to Downs Field also included a radio show on KAZI 88.7FM and a virtual art exhibit and poetry slam. Photographer and visual artist Cindy Elizabeth created A Beautiful Symphony, a portrait series that pays tribute to the rich history of Downs Field, and slam poets Allen Small and Robert Smith aka Scot Free composed a new poem about the field. Interviews and stories recorded throughout this project are being donated to the Austin History Center and the Huston-Tillotson University Archives.

Special Thanks to Our Partners

This Project is Supported in Part By 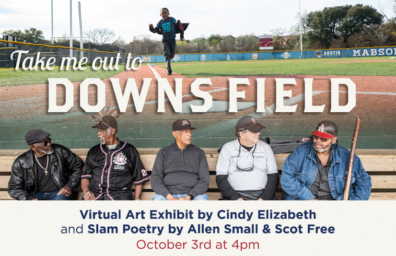 An original art and poetry premiere 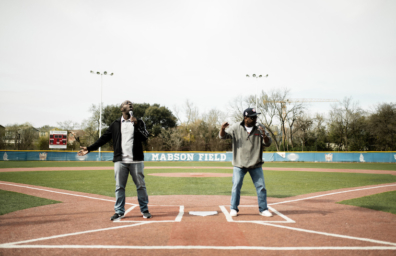